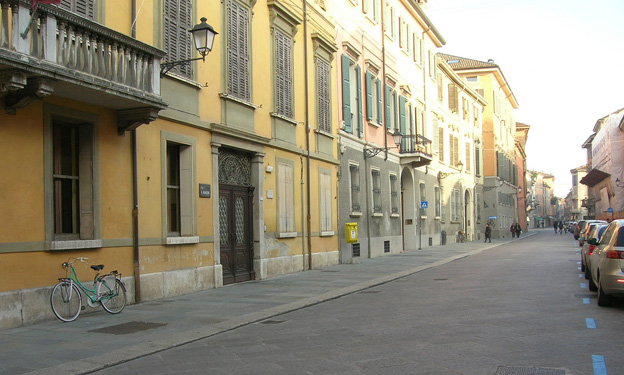 Compared with Via Emilia San Pietro, Santo Stefano is a shorter, yet not less charming branch of the street of Roman origins.

There are different ways of enjoying this street: going shopping, exploring the minor roads departing from Via Emilia Santo Stefano, stopping for a slice of pizza or a coffee in a bar or venturing inside the historical buildings concealing some unexpected treasure

Coming from Piazza del Monte, on the right side we have Vicolo Trivelli, with fashionable boutiques and the 14th century Torre dei Sessi, one of the rare traces of the medieval city.

Inside the Banca Nazionale del Lavoro, at No.4, some 3rd century AD mosaics discovered in the foundations are conserved together with the traces of the old church of S. Bartolomeo.

No. 6 is Casa Cammellini with three large temperas by a young Antonio Fontanesi and, passing in front of Palazzo Fossa-Borzacchi we can admire a 18th century wrought-iron balcony.

Just on the opposite side of the street, Via Monzermone, Via Caggiati and Via della Volta led to the Jewish ghetto created in 1669; in Via dell’Aquila the synagogue is still present and, although it was reconstructed in 1858 by Pietro Marchelli and then neglected for many years, the original decorative structure is now recognizable thanks to recent restoration.

After crossing Piazza Gioberti, on the left hand side we have the church of Santo Stefano, a Templar sanctuary of the 11th century later passed on to the Hospitaliers with some notable Roman remains on the inside.