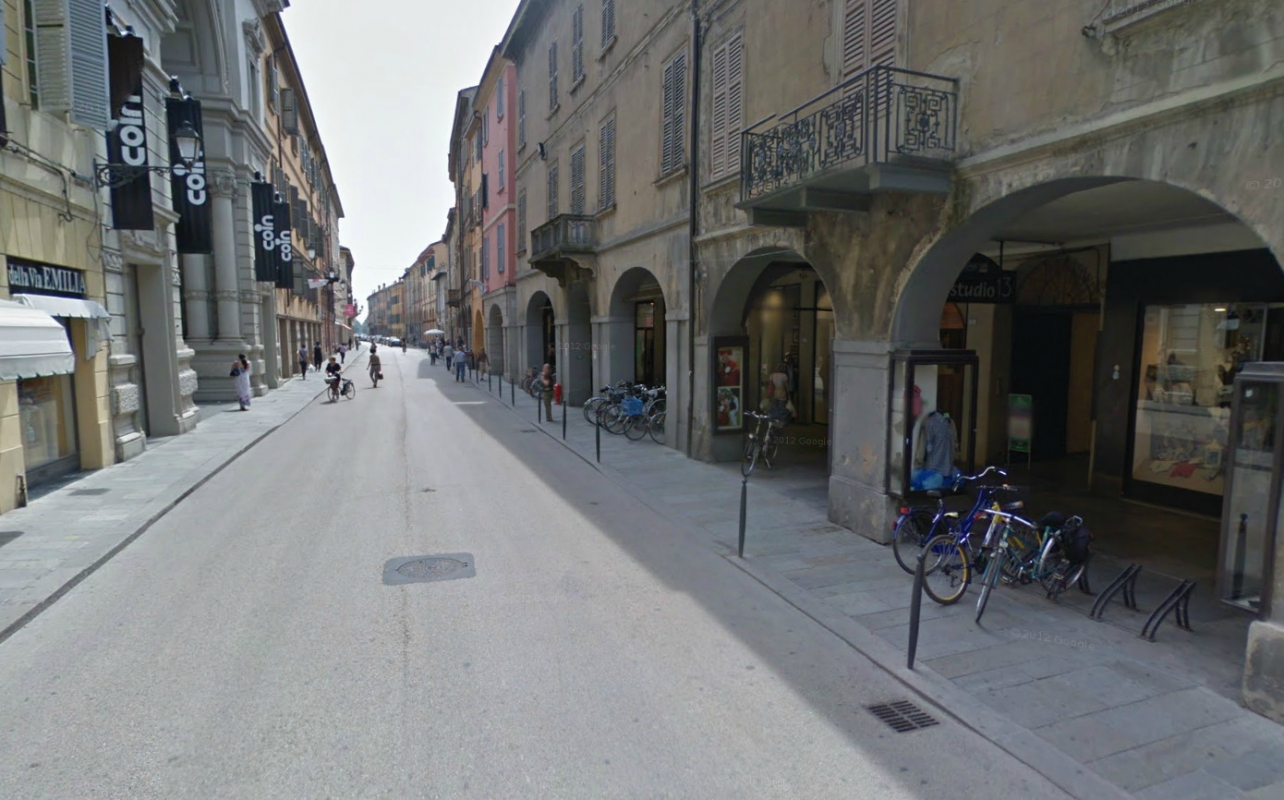 This is the eastern section of Via Emilia and a very recommended path for a shopping stroll through the city center; starting from Piazza del Monte, facing Palazzo del Monte di Pietà, on your left you will find a long, usually busy street, where people go window-shopping and relaxing under a portico, sitting at some cozy café’s table.

However, lining on the two sides of Via Emilia San Pietro there are also some very interesting historical buildings: Palazzo Spalletti-Trivelli (formerly Guicciardi): restructured by the architect GiovanMaria Ferraroni in the 18th century, this building is now the prestigious seat of the Credito Emiliano bank, whose institution has gathered into the building’s halls a very interesting collection of Emilian paintings including “Ecce Homo” by Guido Reni, the “Cimmerian Sibyl” by Guercino, and the “Deposition” by Alessandro Tiarini. The Trivelli family, producers of precious silk also owning the next building, used the house to host VIPs and princes coming to Reggio, consider that even Napoleon slept in here during his staying in Reggio! To increase the already high value of the building, major archeological remains of the Roman town were uncovered here during restructuring works, some of them even dating back to the establishment of the city in 175 BC.

Palazzo Fontanelli-Sacrati: This large building in two blocks presents an elegant 15th century façade, but also in the courtyard an unexpected treasure is concealed: a 16th century marble well creates an extremely harmonic combination with the loggia and portico, an eye-pleasing space adorned with plants and flowers.

Church of Ss. Pietro e Prospero and cloisters: It dates back to the 12th century but it was reconstructed by Guido dalla Torre at the end of the 16th century.

The façade is by Pietro Armani (1782) and the interior is a fine example of Emilian baroque, but the most interesting part of the complex is probably constituted by the cloisters: the small one(1524-25) is a true masterpiece by Bartolomeo Spani, with Brunelleschi references and a portico featuring elegant Renaissance proportions whereas the big one (1580), by Prospero Pacchioni, is an expression of Mannerism, with statues in cotto displayed between the windows in the upper row.

The cloisters complex used to be a monastery but it was turned into a military state property. Nowadays is not only housing the Cavalry Service Historical Hall, but it is also a marvelous frame for important artistic events and performing shows.

“Arco Del Follo”: this monument adorned with neoclassical relief was erected in 1805 in honor of Napoleon’s visit to Reggio frames the access to Via del Follo.

We use cookies on our website to give you the most relevant experience by remembering your preferences and repeat visits. By clicking “Accept All”, you consent to the use of ALL the cookies. However, you may visit "Cookie Settings" to provide a controlled consent.
Cookie SettingsAccept All
Manage consent

This website uses cookies to improve your experience while you navigate through the website. Out of these, the cookies that are categorized as necessary are stored on your browser as they are essential for the working of basic functionalities of the website. We also use third-party cookies that help us analyze and understand how you use this website. These cookies will be stored in your browser only with your consent. You also have the option to opt-out of these cookies. But opting out of some of these cookies may affect your browsing experience.
Necessary Always Enabled
Necessary cookies are absolutely essential for the website to function properly. This category only includes cookies that ensures basic functionalities and security features of the website. These cookies do not store any personal information.
Non-necessary
Any cookies that may not be particularly necessary for the website to function and is used specifically to collect user personal data via analytics, ads, other embedded contents are termed as non-necessary cookies. It is mandatory to procure user consent prior to running these cookies on your website.
SAVE & ACCEPT